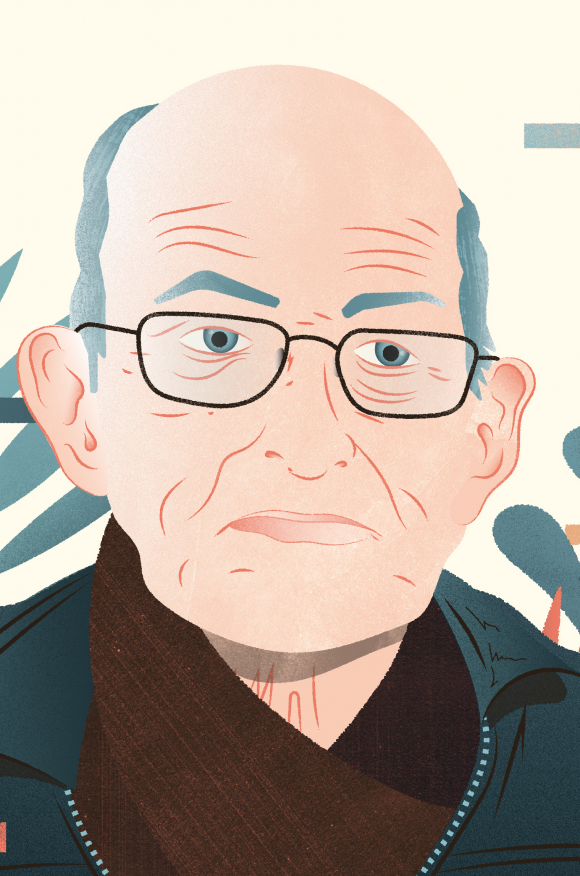 Two bullets. Two. In my head. It’s April 7th, 2014. Someone banged on the door of our community in Homs. The hunger was making my sight blurry. A stranger stood there, I saw that. Dizzy, I stuck my hand out to him. Hope flared up. Had he food? Who was this man? Where had he appeared from?

Boom. He fired. It happened very fast. There wasn’t even time to see him properly. And then, boom, he fired again.

Shall I never again share in the suffering of all these beloved people around me?

Shall I offer them comfort and hope no more?

With no more voice to encourage them…

No ears to listen to them….

My name is Frans van der Lugt. In Syria, people call me Abouna Francis. Father Frans. I am a Dutch Jesuit. I’ve lived in Syria the best part of fifty years.

And then I was shot.

I lived in the Jesuit house, in the heart of Homs. The war devastated our neighbourhood, ripped it apart. Fighters blocked the roads in. Many of us literally died of hunger.

To my last breath I hoped that the hate, conflict and pain would stop.

Yet I’ve seen, in the midst of this misery, something beautiful – a gift. Those of us who stayed behind became brothers and sisters.

I remember a celebration on Palm Sunday. The bombs fell around us, our church was in ruins. But we came together to pray. I asked the imam who lived here to read, during the mass, a text from the Quran. He did so with much enthusiasm. Then the people came to communion and I handed out the host. When the imam’s wife also came forward, all my dogmatic tendencies, in so far as I had them, were put to one side.

Despite the hunger and violence, I never thought about leaving our besieged neighbourhood in Homs. Not even when many others were evacuated. Our neighbourhood is no bigger than a square kilometre. Yet Muslims and Christians from all backgrounds live together peacefully. Our way of living here, this was the Syria I knew. I couldn’t give up on that.

Just a few days ago I was preparing for Easter. Just imagine, we would be celebrating Easter here! The feast marking the passage from death to life.

From death to life.

I wanted people to know in their hearts that life emerges from a dark abyss and that those who are in darkness see a bright, shining light…

In Homs too. There is hope.

As if everything has stopped.

And yet it keeps going.

Yes, it keeps on going.

You might wonder why I say this. In the midst of so much misery. Can I not see that death dances through my body?

I’ll tell you. It has to do with a Man whose life [also] ended gruesomely. He saw his suffering and death approach. That made him deeply afraid. And yet He kept going. He sought people out, he set them free. He kept just loving and loving and loving.

All my life, I wanted to be like this Jesus of Nazareth. It started when I was eighteen. At that time, there was a girl I loved. However, I could not continue seeing her. Quite simply, a different flame burnt inside me. I wanted to be available, not only for her, but for everyone. I wanted my hands free and my arms empty – so they could be filled with the people I would meet.

Like Jesus, who just knew what it meant to live empty and open handed. That’s why I became a priest.

So when I say it keeps going, it is because I believe in the love of God. It is love that keeps on going. No one should be discouraged.

But yes, it keeps going without me. I still find that a bit strange.

Perhaps, then, I can ask you something. Please don’t be angry at my murderer. That only increases the pain and hatred.

But grieve for the distance there was, between me and the man holding the gun. I grieve, because there was no time to listen to the pain in the depths of his heart. It must have been life-size. So great that he was able to kill another.

And who is going to take care of his wounds?

It just keeps on going.